Three years after his last bout with Connor McGregor, “The Stockton Slugger” Nate Diaz returns to the Octagon for UFC 241. Diaz claims the home-state advantage in California, a nod to the roots that shaped him into a vicious fighter. He and his brother, Nick Diaz, held fast to the “kill or be killed” mantra that dominated the streets of Stockton. And Nate has paraded this Devil-may-care attitude both in and out of the Octagon, from heated press conferences to after-party brawls.Yet it was jiu-jitsu that saved him from the grip of gang life and the perils of poverty.

Nate was introduced to the sport by his brother, who dropped out of high school to pursue the one thing he was good at -- fighting. Though the younger Diaz admits he wasn’t initially interested in jiu-jitsu, it offered an enticing incentive.

“The older guys would sometimes buy me a burrito if I went and worked out with Nick. At home we didn’t have s–t. I was starving all day. So that was actually the main reason I wanted to go train. Before I knew it I was a blue belt.”

20 years later and Diaz considers Jiu-Jitsu a part of life, fighting a part of life. He adopted a vegan diet to become more attuned with his body, and he uses CBD to refocus before a fight.

Diaz’s awareness also extends into the community he calls home. Connor McGregor infamously called out Diaz’s work with children, saying “The Stockton Slugger” plays the part of the renegade, but teaches Jiu-Jitsu classes on Sundays and makes balloon animals.

The latter is in question, but the Diaz brothers do own and operate their gym “The Nick Diaz Academy.” They offer classes for all ages and skill levels, from kindergartners to professional fighters. Nate has taught seminars nationwide. 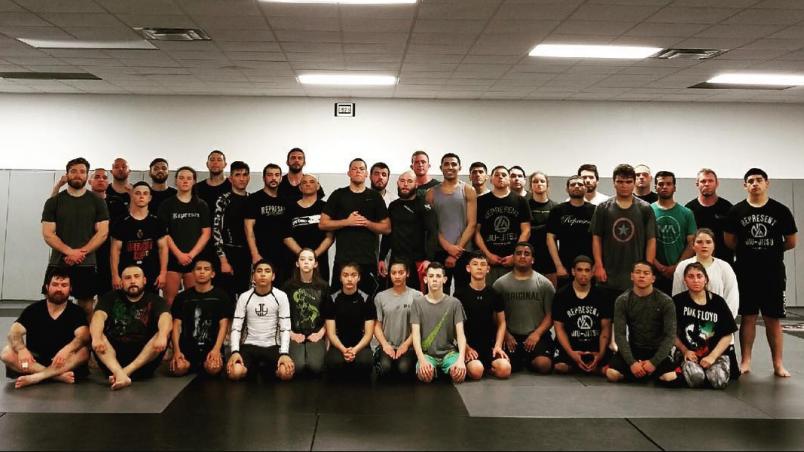 McGregor’s efforts to slander Diaz’s brusque persona backfired, for it only paid homage to his triumph over adversity and his dedication to those that got him there. Diaz channels his success into helping his hometown, giving kids an alternative to street life.

“He used to be one of those kids," explains former Oakland A’s pitcher and Stockton native, Dallas Braden. "And he never forgot that somebody helped him out.”