In Sunday’s UFC Fight Night co-main event at Arena Zagreb in Croatia, Derrick Lewis may have earned himself a spot in the heavyweight top 15, as he knocked out veteran gatekeeper Gabriel Gonzaga in the first round.

Lewis knocked Gonzaga off balance with a right kick to the head as the bout began, and Gonzaga immediately tied his foe up and took him to the canvas. Gonzaga, now bleeding from the nose, smoothly took Lewis’ back, but the Houston product fought his way back to a standing position. Gonzaga remained locked on to his foe, but it was Lewis firing off strikes at close range. With three minutes gone, referee Marc Goddard restarted the stalled action, yet the two locked back up. A second restart took place with less than a minute left, and this time, “The Black Beast” broke loose, rocking and dropping Gonzaga with a flush right hand. From there, a single follow-up right hand was all it took for referee Marc Goddard to step in and stop the fight at the 4:48 mark.

Blaydes got Ngannou’s attention with the first jab he landed, but the Cameroon native was able to get his bearings back and fight off Blaydes’ first takedown attempt. Midway through the round, a straight left staggered Blaydes for a second, and moments later, a second left produced a flash knockdown. Blaydes recovered quickly, getting his first takedown with a little over a minute remaining, but Ngannou was on his feet by the end of the frame.

A couple heated exchanges early in round two left Blaydes’ right eye nearly swollen shut, leading the Chicago product to get a little more desperate in his attack. That aggression worked as he scored a second takedown, but Ngannou rose to his feet without taking any damage on the mat.

By the second half of the round, Blaydes’ eye was shut, allowing Ngannou to now dictate the pace of the fight, and despite Blaydes’ protests, the doctor had seen enough, not allowing the American to come out of the corner for round three.

Tybura looked to be unaffected by the first-time Octagon jitters in the opening frame, but it was Johnson who showed his UFC experience at range and in the clinch, earning himself the round.

Johnson opened up a cut on Tybura early in round two, and while the action was competitive, the American always seemed to be a step ahead throughout, with a late flurry sealing the deal for the Fargo product.

Tybura got a takedown to start round three, and though it was a big boost for the Poland native, Johnson got back to his feet quickly. A right head kick subsequently rocked Johnson, adding to the UFC rookie’s late surge, and the American’s left eye was now rapidly closing. But he made it to the end of the fight and took home a hard-fought win. 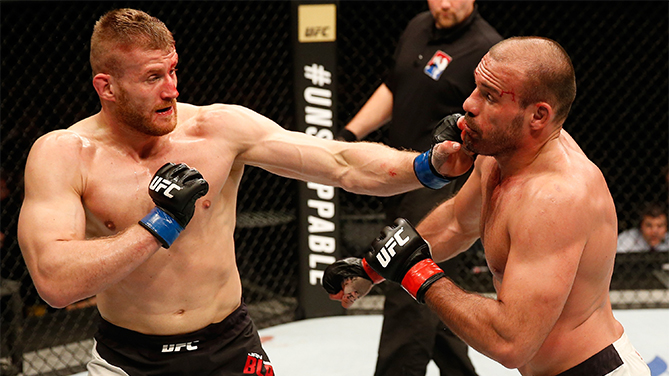 Polish light heavyweight Jan Blachowicz got back in the win column in his bout with Zagreb veteran Igor Pokrajac, keeping “The Duke” from getting a victory in his first Octagon match since 2014 by picking up a three-round unanimous decision.

Blachowicz took Pokrajac to the mat to kick off the bout, and he smoothly assumed control, using his strikes and positioning to keep the hometown favorite grounded. Midway through the round though, Pokrajac got free and reversed position, and the crowd roared as their hero dropped bombs from above until the horn.

A brawl broke out in the second minute of round two, with Blachowicz hurting Pokrajac with his strikes, but “The Duke” firing back with blows of his own as he taunted his foe and asked for more. As the crowd erupted, Blachowicz took Pokrajac down and tried to quiet the fans, a smart strategy that allowed the Poland native to slow the pace and still score points. With a minute left, the two rose and Pokrajac took the lead against the fence, giving his fans something more to cheer about before round’s end.

The ground game was the go-to attack for Blachowicz in the final frame, and again, it was the right move, as he wrapped up the round and the fight.

Coming out of her corner with an unorthodox stance, Stanciu got into the fight with a barrage of strikes that briefly jarred Moroz. A guillotine attempt followed from “Barbie,” but Moroz shook it off and began working her ground game from the top, landing some punches to the stomach before the fight resumed from a stand-up position. With a little over a minute left, Moroz took the bout back to the mat and quickly took her opponent’s back but was unable to finish.

The pace dipped early in the second, but as Stanciu got a second wind and began aggressively attacking again, Moroz answered in kind with good ground work before a late return to the feet that saw the Ukrainian end the stanza with a hard left.

Stanciu played the aggressor as the final round began, and while fatigue was affecting her technique, she was still able to land shots before getting the top position on a trip to the canvas. Moroz calmly went for her trademark armbar from the bottom, but Stanciu defended well and even attempted a triangle choke briefly, the two grappling to the final horn. 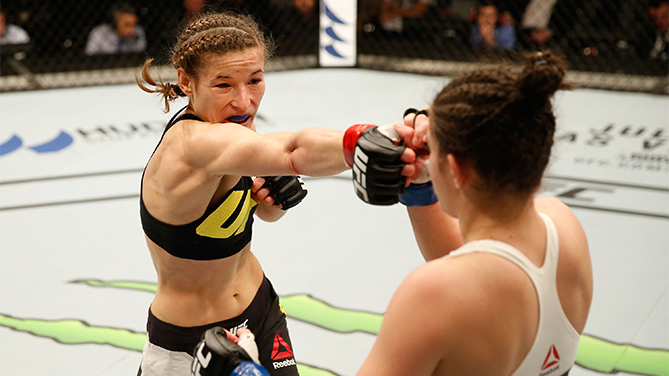