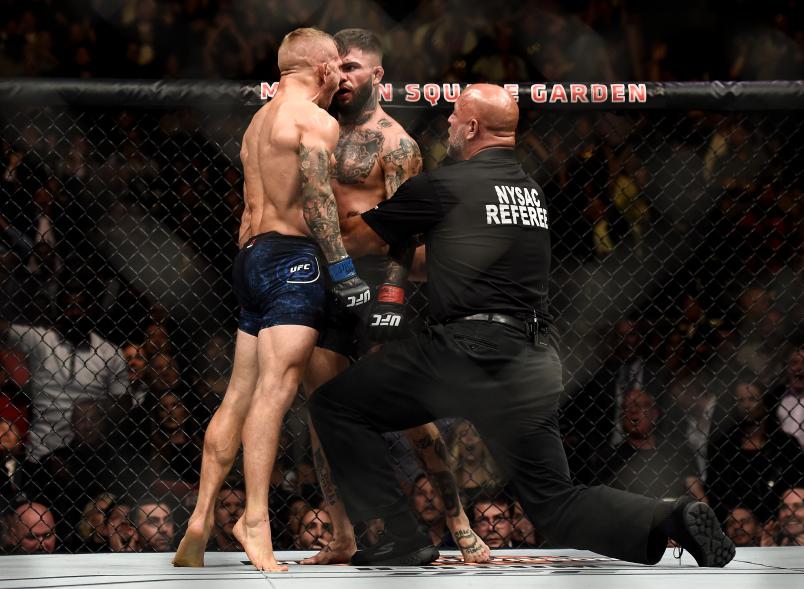 TJ Dillashaw’s bad blood rivalry with former teammate Cody Garbrandt may have been put in the rearview mirror after his second stoppage victory over “No Love,” but if you assume the UFC bantamweight champion is taking his foot off the gas and settling in to enjoy his second reign, that’s certainly not the case.

“With the title comes a lot of work,” he continues. “You have a big target on your back, everyone’s pulling you in every direction and I’m trying to make the most out of my situation. I’ll continue to aspire to be better and I’m always setting new goals, so it’s not about enjoying it; it’s about making the best of the situation. I’ve been starting businesses, giving back to the guys in my gym, traveling and doing seminars. I’m trying to make the best life for my family as possible.”

And though his August win over Garbrandt in the main event of UFC 227 is still fresh in the mind of fight fans, Dillashaw is already plotting the next step in his career and he’s not thinking of just another 135-pound title defense. In fact, when asked what his ideal next bout would be, he almost answers before the question is finished. 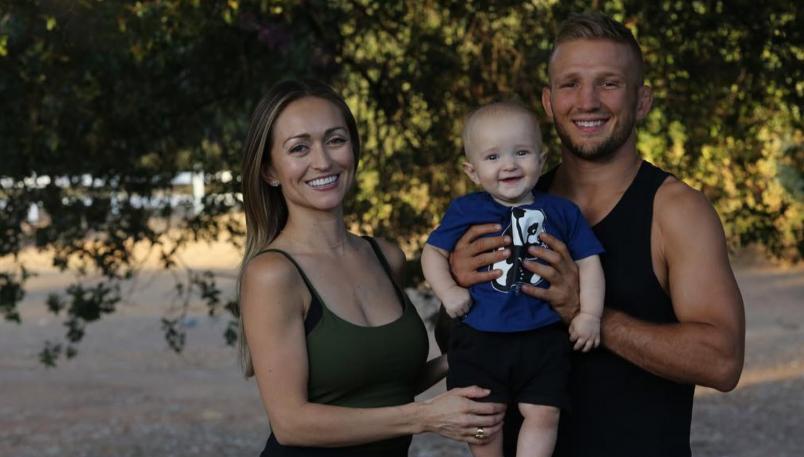 “Henry Cejudo,” said Dillashaw, making it clear that he wants to add another belt to his collection by dropping to 125 pounds to challenge the flyweight king.

“He’s a gold medalist and he thinks he’s got a chance against me,” said Dillashaw of Cejudo, who took the flyweight belt from Demetrious Johnson on the same night as Dillashaw-Garbrandt 2. “Collecting that second belt would be huge for me and I can make the weight class easily.”

Dillashaw isn’t done there, though, as a win over Cejudo would only be the second part of his master plan.

“It (fighting Cejudo) is a great challenge as well as a great fight, and I’m looking to be the best fighter in the world,” he said. “I want to be the first fighter to ever hold three belts. Holding two has already been done, and I know I can do three. I’m at the perfect weight to go ’45, ’35 or ’25. Cejudo’s already called me out, so I’ll cross him off the list next.”

In addition to belt chasing, Dillashaw also has an impressive list of contenders at bantamweight waiting for him, and the 32-year-old Californian hasn’t forgotten about the likes of Dominick Cruz, Raphael Assuncao, Marlon Moraes and company, either.

“I want to collect those other belts and the bantamweight division is stacked, so I have some figuring out to do and people have to figure out who’s the true number one contender,” he said. “So now is the perfect time to broaden my name and show that I’m the greatest martial artist on the planet.”

It’s a great place for Dillashaw to be in, because while some fighters will lack motivation after the emotions of beating a heated rival die down, that’s not the case for the bantamweight boss, who has more than enough reasons to go to the gym every day.

“It’s definitely a good position, that’s for sure,” he said. “I did have to deal with a lot (against Garbrandt). I was portrayed as the bad guy for the last couple fights, but the truth started to come out, as well as some impressive victories. There was a lot of hype behind Cody, I tried telling everyone it was just hype, so to prove myself right was great. And to prove that I made the right choices in my career was a great feeling. So it is a good spot to be in right now because of the options I have.”

And while there is some existing heat with Cruz, who ended Dillashaw’s first reign in 2016, there really is no future dance partner who will put the champion in the same situation as he was with Garbrandt over the last couple years. And that’s just fine with Dillashaw.

“I don’t look for that extra drama added to my life,” he said. “It’s a very stressful job on its own, just competing as well as fighting and all the pressure that’s put on you through that. So adding any kind of drama to your life isn’t something you look for. Having to go through it and come out on top was a great thing. There was a lot of tension in those fights, a lot of hype on them, and that did great for me. But it’s not something I choose to go through. I’m drama-free in my life, so if I had a choice, I wouldn’t go through it again. But it was a great outcome, so I wouldn’t wish anything different.”

From now, it’s all about the fights, and Dillashaw has plenty of them that he wants to get into sooner rather than later. And as the third-ranked fighter on the pound-for-pound list, he’s earned the right to call his shot.

“This feels great because I put so much time in,” he said. “If I didn’t work as hard as I did to be the best at something, I don’t think it would be as gratifying. But I’m one of those guys that doesn’t cut any corners. I feel like I’m the champion among champions, the one that’s going to do every single thing I possibly can to better myself. Anything from my diet to the way I train to the coaches I’m seeking out to the recovery systems I put together and the science that goes into my training. I’m all-in. I put a lot into this, and for that hard work to pay off, it means a lot.”

Check In With Another Champ: Rose Namajunas