Askren is going to be forever dogged by some fans for the way things played out when he stepped into the Octagon opposite Jorge Masvidal earlier this year, but you have to give the mop-topped grappler credit, as he’s handled being on the wrong side of the fastest knockout in UFC history with aplomb and jumped at the opportunity to get right back into the cage, accepting a headlining bout against Maia.

After entering the year on a three-fight skid (against the top three fighters in the division), the Brazilian veteran has posted consecutive victories and inked a two-fight extension with the UFC, guaranteeing that win or lose, Maia will continue competing next year.

This is a dream matchup for grappling fans and both competitors are genuinely excited about testing themselves against the other. While many contests between standout ground fighters often turn into ugly kickboxing matches, these two each want to prove themselves to be the superior grappler, which means fans should be treated to a chess match featuring numerous scrambles and some highly technical work on the canvas.

Plus, the winner puts himself right back in the thick of the chase in the welterweight division heading into 2020.

Back at lightweight following a four-fight stint competing at featherweight, Johnson looks to get back in the win column in a tough pairing with the durable and dangerous Ray.

For a couple years, Johnson was on the cusp of contention in the deep 155-pound ranks, putting together a four-fight winning streak capped by a win over Edson Barboza and posting a first-round knockout win over Dustin Poirier. But consecutive losses to Khabib Nurmagomedov and Justin Gaethje prompted “The Menace” to pack his things and head to featherweight, where he sandwiched wins over Andre Fili and Artem Lobov between stoppage losses to Darren Elkins and Josh Emmett.

As for Ray, the 29-year-old from Fife has gone 6-4 in his 10 UFC starts. Last time out, “Braveheart” got caught on the end of a clean right hand from Leonardo Santos, sending him to his third loss in his last four outings.

Each of these veterans needs a victory — Johnson to reestablish himself in the division and Ray to avoid an ugly 1-4 stretch — which should result in both men showing up to Singapore Indoor Arena ready to put on a show.

Another lightweight clash, this one pits the all-action Camacho against the laid back grappler Dariush in a bout that represents a major opportunity for the fan favorite fighting out of the Northern Mariana Islands.

Although he’s just 2-3 in his first five UFC appearances, Camacho has earned a well-deserved reputation as a must-see competitor, garnering Fight of the Night honors in each of his first three appearances before following it up with a loss to Geoff Neal and a standout performance against Nick Hein last time out. Though he’s been happy to bounce between lightweight and welterweight, both of Camacho’s victories have come in the 155-pound weight class and now he gets the chance to square off with a former Top 10 fighter looking to regain his place in the divisional hierarchy.

Dariush went without a victory during a three-fight stretch between March 2017 and March 2018, suffering a pair of knockout losses with a majority draw result in between. Since then, the 30-year-old has returned to the form that carried him into the Top 10 prior to that skid, posting consecutive victories over Thiago Moises and Drew Dober.

Camacho is an in-your-face fighter who is tough to put away and is more well-rounded than he’s shown thus far during his UFC run, but Dariush has far more high-end experience and is truly world-class on the canvas. Will the aggressive crowd-pleaser earn the biggest win of his career or will the easy-going grappler secure a third straight victory?

There is a real possibility that the winner of this one heads into 2020 as the top prospect in the heavyweight division.

Gane has earned high praise and rave reviews through his first four professional bouts, which include a first-round submission win in his promotional debut in August. Training out of Paris’ MMA Factory, the same gym that produced Francis Ngannou, the 28-year-old former TKO heavyweight champion is more polished than “The Predator” was when he first arrived in the UFC and can further establish himself as an impending threat with another strong showing here.

Mayes has won four straight heading into his promotional debut, including a pair of stoppages on the Contender Series. Pundits have been high on Mayes’ potential for a couple years now and the improved conditioning and patience he’s shown of late bodes well for his prospects going forward.

Both of these men brandish serious knockout power, so while it’s used far too often in combat sports, this is one of those few times where the “Don’t Blink” directive is appropriate.

Welterweights with back-to-back wins inside the Octagon meet in an intriguing showdown.

After getting submitted in his promotional debut, Salikhov has rebounded with consecutive stoppage wins, most recently felling Nordine Taleb with a blistering right hand that sent the veteran crashing to the canvas in a heap. The “King of Kung Fu” is a multiple-time Wushu Sanda world champion who spent many years competing in Asia, so don’t be surprised if Salikhov enters to a massive ovation on Saturday.

Staropoli has quietly gone 2-0 since arriving in the UFC last November, extending his winning streak to seven in the process. The 26-year-old Argentine is coming off a unanimous decision win over divisional stalwart Thiago Alves and looks to close out his first year on the roster with another strong performance in Singapore.

Strawweights searching for consistency inside the cage meet in the final preliminary card bout of the night as Markos makes her third appearance of 2019 opposite fellow TUF alum Yoder.

Through her first 12 UFC appearances, Markos has yet to win or lose consecutive contests, alternating losses and wins over her first nine bouts before posting a draw, a win and a loss in her last three outings. The gritty Canadian looked outstanding in her victory over Angela Hill in Nashville, but then struggled to find her range against former title contender Claudia Gadelha in July.

While she enters this pairing with a 2-3 record in the Octagon, Yoder has actually earned back-to-back victories after following up her split decision win over Amanda Cooper last year with a unanimous decision triumph opposite Syuri Kondo in June. The 31-year-old “SpiderMonkey” was originally scheduled to face Yan Xiaonan, but now gets the chance to knock off a divisional fixture instead.

This is a critical matchup for the highly regarded Fiziev, as he goes searching for his first UFC win against White.

Unbeaten heading into his promotional debut in April, Fiziev was dispatched in less than 90 seconds by the returning Magomed Mustafaev. Now the 26-year-old Tiger Muay Thai product looks to regain the momentum he carried into that contest and show why he was considered one to watch upon arrival in a clash with the dangerous Missourian.

White is one of those fighters whose UFC record sits below .500 and doesn’t quite paint a proper picture of the where he stands in the division. The 30-year-old is 3-3 over his last six fights with those losses coming against Anthony Rocco Martin, James Krause and Jim Miller, a trio of talented veterans who sit just outside the Top 15 in their respective divisions.

Although the results haven’t always been there, White is a gamer with good power in his hands and an aggressive approach in the cage, so Fiziev will need to be at his best in order to avoid an 0-2 start to his UFC career.

Though it’s stationed on the preliminary portion of Saturday’s card, this featherweight matchup is one of the most compelling contests set to hit the Octagon in Singapore this weekend.

Evloev looked outstanding in his promotional debut earlier this year, collecting an easy unanimous decision victory while showing bits and pieces of the well-stocked arsenal that has produced 11 wins in as many starts. The 25-year-old, who was initially slated to make his sophomore venture into the cage in Shenzhen only to have two opponents felled by injuries, is an intriguing name to remember in the loaded 145-pound weight class.

Barzola is a prime example of someone who has been overshadowed by the tremendous depth of talent in the featherweight division. The 30-year-old from Peru, who currently trains at American Kickboxing Academy in San Jose, has amassed a 6-2 record in eight UFC appearances, posting wins over Gabriel Benitez, Brandon Davis and Bobby Moffett, but has been unable to find his way into higher profile pairings.

While the division is never lacking for new names climbing the ranks, the winner of this one should find himself in position to garner more attention and greater opportunities next year.

The second of three heavyweight pairings between emerging names looking to make a move up the divisional ladder pits TUF 28’s Greene against the once-beaten Russian Pavlovich.

Since exiting the Ultimate Fighter house, “The Crotchet Boss” has stitched together three straight victories, most recently knocking out Junior Albini in Minnesota. The proud father has been putting in work with the crew at Factory X and as he continues to sharpen his skills and learn to utilize his height and reach, Greene could develop into a handful in the heavyweight ranks.

Subscribe To ESPN+ To Catch All The Singapore Action

The 27-year-old Pavlovich got thrown into the deep end of the heavyweight talent pool in his promotional debut, squaring off with Alistair Overeem in the co-main event of the last year’s event in Beijing, China. Five months later, the former Fight Nights Global champion registered his first win, dispatching Marcelo Golm in 66 seconds.A couple big wins is all it takes to climb the ladder in the heavyweight division and a dominant showing from either man here should vault them into the conversation for a place in the lower third of the rankings. 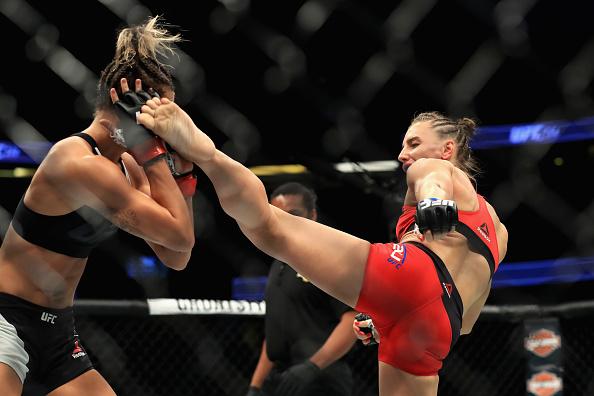 Albu and Lookboonmee arrive at their preliminary card pairing from very different places.

Albu made her promotional debut five years ago, collecting a second-round submission win over Izabela Badurek. Two years later, she outworked Kailin Curran to register a unanimous decision victory. And 19 months after that, she reappeared in Phoenix, suffering the first loss of her career in a bout against Emily Whitmire. Now “Stitch” is set to make the quickest turnaround of her career in hopes of getting back into the win column.

While Albu has been on the roster since Furious 7 raced into theatres, Lookboonmee will be making her first walk into the UFC cage on Saturday. The 23-year-old is the first fighter from Thailand to compete inside the Octagon and is in the early stages of her transition from Muay Thai to MMA, which she’s making under the watchful eye of the team at Tiger Muay Thai.

More heavyweight action is on deck in Singapore as Nunes and Hughes meet in a battle between two men looking for their first UFC victory.

Nunes made his promotional debut in August, getting trapped in an arm triangle choke against Ciryl Gane. Prior to that, the 30-year-old Brazilian had won nine straight, including a 99-second stoppage win in his lone appearance under the LFA banner.

A graduate of the Contender Series, Hughes has run into some tough luck through his first two trips into the Octagon, landing on the wrong side of a split decision verdict against Greene in his debut before his sophomore showing against Todd Duffee was halted late in the first round following an accidental eye poke.