Strawweight prospect Emily Whitmire removed Russia’s Alexandra Albu from the ranks of the unbeaten as she scored a first-round submission win in the strawweight opener from Talking Stick Resort Arena.

After landing some hard shots to begin the bout, Whitmire slammed Albu to the mat, and while Albu nearly scrambled her way out of trouble, in the process, Whitmire took her back and sunk in the rear naked choke that produced a tap out at the 1:01 mark of round one.

Barao, who came in overweight for the bout at 138 pounds, had a strong first round, using kicks to the legs and body to set up power shots upstairs, including a big right hand with a minute left that rocked the Nashville product. But Sanders made the necessary adjustments before round two, and in that second stanza, he lowered the boom, dropping Barao with a 1-2 that ended with a left hand, setting up three final right hands on the mat that prompted referee Al Guinee to halt the contest at 1:01 of the frame.

Lightweight veteran Nik Lentz made it two in a row against Scott Holtzman, as he won a grueling three-rounder via unanimous decision.

A fast start by both men on the feet was slowed down in the second half of the round as Lentz tried to implement his grappling attack. Holtzman was able to keep Lentz at range for much of the second frame, and he landed several hard power shots along the way. Lentz took the shots well and kept his game plan in mind, though, and as they went to the mat with under two minutes left, he nearly finished the bout with a guillotine choke. Holtzman got loose, but the final stages of the round belonged to “The Carny.”

Lentz showed off his grappling prowess again in the third round, but as he looked for a takedown, Holtzman landed a series of hard shots, bloodying and bruising the Floridian. As they separated, Holtzman appeared to rock Lentz again, but Lentz was able to lock up Knoxville’s Holtzman once more before the horn sounded. 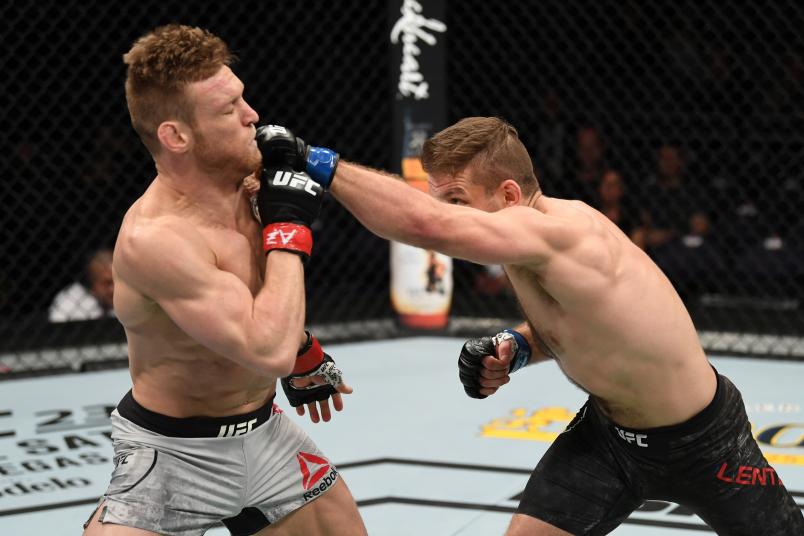 Back in action for the first time since May 2018, Andrea Lee won her sixth straight bout, taking a shutout three-round decision over fellow flyweight contender Ashlee Evans-Smith.

Lee was the sharper striker from the start, with varied combinations her weapon of choice whenever she got in range. Evans-Smith fired back, landing with several kicks down the middle, but it wasn’t until three minutes were left in the second round that she was able to negate the attack of Lee, as she took “KGB” to the mat. With two minutes left, Lee got back to her feet and the two remained standing for the rest of the frame. The third continued to be competitive, but Lee continued to land the crisper shots, leading to a clear 30-27 win on all three judges’ scorecards.

After getting Lopez to the mat in the opening minute, Bermudez went hunting for a submission, which was no surprise to anyone. Lopez was able to get back to his feet fairly quickly, but the New Englander stayed locked on to him against the fence, and when the opening presented itself, Bermudez pounced. All of a sudden Bermudez locked in a D’Arce choke, and it was game over, with Lopez forced to tap out at 3:09 of round one.

Sterling promised to make Rivera wrestle, and he lived up to his words in the opening round. And even though he wasn’t able to get his opponent to the mat, much of the grappling exchanges went to the “Funk Master.”

Rivera got more aggressive to start round two, but after putting the pace back in his favor, Sterling appeared to jar Rivera and the Long Islander showed off his striking attack as he backed Rivera to the fence. Rivera got in some shots in the final minute, but Sterling was unmoved.

Knowing he needed to turn things around in a big way in the final round, Rivera tried to bring Sterling into a brawl, but the New Yorker remained calm and stuck to the game plan, making it no surprise when he was declared the winner by identical scores of 30-27.

In an intriguing featherweight matchup, Andre Fili and Myles Jury battled it out for three competitive rounds, with Fili taking the nod via unanimous decision.

Fili controlled much of the opening round with his jab, keeping Jury at a distance while bloodying the Michigan native’s nose as well. Jury did briefly stagger Fili in the final minute, keeping the Sacramento product honest.

Jury got into the jabbing game with Fili in round two and they went back and forth tagging each other, but again, in the final minute, Jury landed the big shot. This time, it was a spinning back fist that put Fili on the deck. Fili recovered quickly, but it was another strong close to the round for Jury.

Fili didn’t let up with his pace in the third, and that busy attack allowed him to surge ahead and take the judges’ decision.

Vicente Luque has been flying under the radar for far too long, but that situation should change after the Brazilian’s fourth consecutive win and finish, a third-round stoppage of Bryan Barberena in an action-packed welterweight war.

There was no shortage of compelling action in the opening round, with Luque leading the way behind a series of stiff right and left hands that landed flush on the steel-chinned Barberena. With a little over a minute left, though, Barberena landed a left hand that dropped Luque. Luque recovered instantly, nearly finishing Barberena with rear naked and D’Arce chokes. But after his second escape, Barberena got the crowd roaring with a series of elbows on the mat.

There was no let-up from either man in the second round, and while Luque remained in the lead, Barberena’s durability was the story of the night, as he marched through bomb after bomb, with only a knee late in the round briefly putting him on the deck.

Yet just when it was expected that the fight would go the full 15 minutes as the two warriors emptied their tanks, a late third-round surge from Luque started by another knee dropped Barberena, with a follow-up barrage of strikes bringing in referee Jason Herzog to stop the bout at 4:54 of the final frame.

The Gracie name is alive and well in the UFC, as featherweight Kron Gracie became the first member of his legendary family to win in the Octagon since his uncle Royce, with a first-round submission of Alex Caceres taking just a little over two minutes.

After feeling matters out with his striking, Gracie locked up with Caceres and got him to the mat 90 seconds into the fight. Gracie sunk in a rear naked choke almost immediately, and that was that, with Caceres forced to tap out at 2:06 of round one.

Cynthia Calvillo spoiled the homecoming of Phoenix’s Cortney Casey, winning a close, but unanimous, three-round decision in a meeting of strawweight contenders.

The first round was close and fast-paced, with Calvillo landing the more telling blows while battling the pressure of Casey in a five-minute frame contested entirely on the feet.

In the second, both fighters continued to have their moments, Casey attacking Calvillo’s legs with kicks while the Californian countered and looked to get the bout to the mat. Casey refused to be taken down, but Calvillo wouldn’t be discouraged, and when firefights would break out, she would take the lead, allowing her to get the nod on the scorecards.

In the UFC Phoenix co-main event, Paul Felder likely earned a spot in the lightweight rankings with a hard-fought three-round unanimous decision win over James Vick.

Felder was throwing punches and kicks with bad intentions as soon as the fight began, and he landed more than his share of them, but Fort Worth’s Vick got in his own shots as he reddened Felder’s face and kept him at the end of his jab. But late in the round, a spinning back fist staggered Vick briefly, forcing the Texan to seek a clinch until the horn sounded.

After eating several calf kicks in the first round, Vick locked up with Felder early in round two and sought a takedown, but Felder eventually was able to get loose. Once freed of the clinch, Felder went back on the attack, but Vick was landing his own shots, making the round tough to score.

Vick started limping in the second minute of the third round after another kick to the calf, allowing Felder to get his shots off even more effectively, but Vick was still firing back, keeping the Philadelphian from getting too aggressive as they battled to the final horn.

Cain Velasquez was poised to get back in the title race with a win in his Sunday comeback bout against Francis Ngannou, but “The Predator” had other ideas, as he silenced the pro-Velasquez crowd at Talking Stick Resort Arena in Phoenix by halting the two-time UFC heavyweight champion in less than a minute.

“I stood a little too close, too early,” said a gracious Velasquez. “This is why this sport is so great, you never know what’s gonna happen.”

True, but few expected this outcome.

As the two engaged, there was a clear sense of danger approaching, and as Ngannou landed a 1-2, Velasquez shot in for a takedown. Ngannou fought it off, then landed a right uppercut. Velasquez’ knee buckled and the Arizona native hit the deck with a yell and covered up. After two follow-up shots by Ngannou, referee Jason Herzog waved the fight off. The official time of the stoppage was 26 seconds of round one.

“He was really fast, so I didn’t even realize what happened,” said Ngannou, who has looked like a changed man in his two bouts since a disappointing two-fight stretch in which he lost to Stipe Miocic and Derrick Lewis.