As part of the UFC Foundation’s launch, the non-profit served as the charitable beneficiary of the in-venue 50/50 raffle during UFC 272: COVINGTON vs. MASVIDAL
От Brian Smith • 13.04.22

UFC recently announced the launch of the UFC Foundation, a non-profit organization committed to supporting charitable organizations and initiatives throughout the state of Nevada and beyond.

“Over the years, UFC has raised and donated millions of dollars for charitable causes both locally here in Nevada and elsewhere as a way to give back to the communities that have supported us or simply as a way to help those in need,” said Lawrence Epstein, UFC Chief Operating Officer. “With UFC Foundation, we will now have the additional resources of a 501(c)(3) non-profit organization to strengthen those and also support charitable causes that athletes are passionate about.”

UFC Foundation is dedicated to making a positive and sustainable impact by advocating for youth, public service, equality, and those who fight to overcome critical and life-threatening illnesses.

As part of the UFC Foundation’s launch, the non-profit served as the charitable beneficiary of the in-venue 50/50 raffle during UFC 272: COVINGTON vs. MASVIDAL, which took place on Saturday, March 5, at T-Mobile Arena in Las Vegas. The UFC 272 50/50 raffle raised $80,740, which ranks as the fifth-highest total in UFC history.

MORE UFC IN THE COMMUNITY 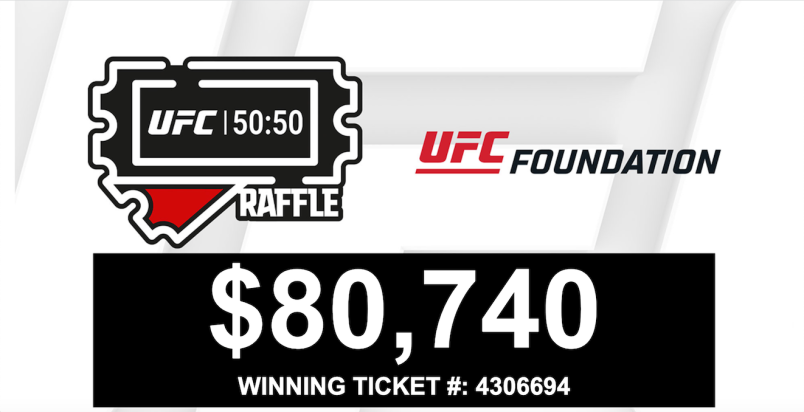 A winner did not come forward during the 30-day time frame allotted by the Nevada Gaming Control Board (NGCB). Per the rules and regulations set forth by the NGCB, the entire jackpot from UFC 272 will benefit the UFC Foundation.

The UFC Foundation will work in tandem with UFC’s corporate responsibility program, #UFCInTheCommunity, to collaborate strategically with partners, sponsors, and athletes to develop additional charitable programs and funding sources to help bolster and inspire the local community.

Since 2017, UFC has produced 22 charitable 50/50 raffles throughout North America. UFC’s 50/50 raffles have raised more than $1.04 million, with net proceeds benefitting local charitable organizations in the communities that have hosted UFC during Fight Weeks throughout the United States and Canada.

UFC 272: Covington vs Masvidal took place on Saturday, March 5, 2022, live from a sold out T-Mobile Arena in Las Vegas. See the Final Results, Official Scorecards and Who Won Bonuses — and relive all of the action on UFC Fight Pass.

Тэги
UFC IN THE COMMUNITY