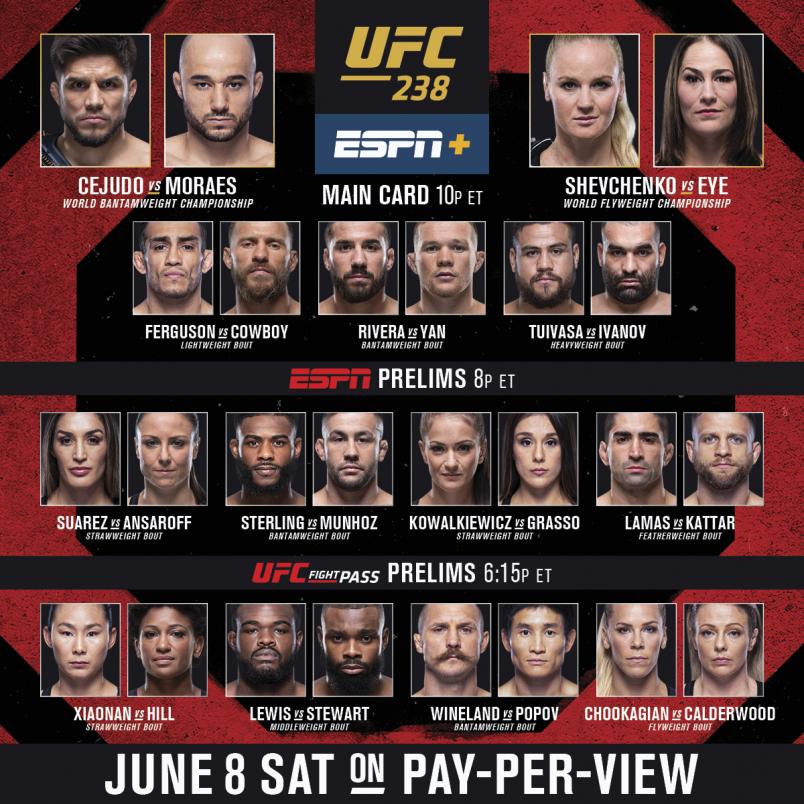 In the opener at United Center, Katlyn Chookagian won a close, but unanimous, decision over fellow flyweight contender Joanne Calderwood.

Good work was done by both fighters in a first round waged entirely on the feet, but the most notable damage was done by Calderwood, who battered Chookagian’s left leg with kicks.

Switching things up early in round two, Calderwood scored a quick takedown, but Chookagian got to her feet almost immediately and began landing the crisper strikes, led by a laser-like right hand that kept finding its mark. Another Calderwood takedown punctuated the latter stages of the round, and this time “Jo Jo” kept her foe grounded until the horn, even though Chookagian was the busier of the two on the mat.

By round three, each combatant was showing the wear of battle, but neither was backing down. Calderwood got a third takedown just before the midway point of the round, but it was a point-scoring device more than anything, as the Scotland native let her foe back up quickly. And while Chookagian kept pressing, some late-fight showboating Calderwood didn’t help “Jo Jo,” who fell short on the scorecards.

Wineland took a few hard kicks and knees in the first round, but other than that, the frame belonged to the Indiana veteran, who pushed the pace on Popov throughout, rocking him with a couple right hands and cutting him over the eye.

Popov made a statement early in the second as he briefly rocked Wineland, and the Russian’s confidence was growing, but with a minute left, the first WEC bantamweight champion dropped Popov hard with a series of rights and nearly finished the fight. Popov would survive that first onslaught, but moments later, another right sent him down, and referee Kevin MacDonald stepped in, stopping the fight at 4:47 of round two.

It wasn’t the barnburner many expected to see, but veteran middleweight Darren Stewart did what he needed to do to hand hot prospect Bevon Lewis his second consecutive defeat via unanimous decision.

Each round of the 15-minute battle was close, but the tale of the fight was Lewis not being active enough and Stewart landing the more telling blows throughout. That allowed the Londoner to continue his move toward the top 15 at 185 pounds.

Beijing’s Yan Xiaonan improved to 4-0 in the UFC as she took a hard-fought three round unanimous decision over Angela Hill in strawweight action.

A competitive first round was broken wide open in the closing seconds when Hill nearly finished matters with a triangle choke, but Yan survived and went on the attack as soon as the second stanza began. The second also saw both women having their moments, but Yan appeared to edge it out going into the final frame. And with the fight on the line, Yan and Hill left nothing up to chance, with Yan the busier fighter but Hill the more varied with her striking attack down the stretch.

The action was measured in the early going, with each fighter trying to gauge distance to unleash more significant attacks. It was Massachusetts’ Kattar who found that range first, though, and it was all he needed to end the fight, as he scored with a left-right combination that put Lamas down and brought in referee Dan Miragliotta to stop the fight moments later at 4:06 of the opening frame.

It took five fights, but Alexa Grasso showed why the MMA world was so excited for her entrance into the UFC, as she put together a stellar effort in shutting out Karolina Kowalkiewicz over three rounds in a meeting of strawweight contenders.

The first round couldn’t have gone better for Grasso, who picked Kowalkiewicz apart with a crisp and varied striking attack. That’s not to say the bloodied Kowalkiewicz was outclassed, as she tried to answer every shot from Grasso, but she was a step behind the Mexican standout.

As the fight progressed, there was no questioning the heart of Kowalkiewicz, but Grasso wasn’t slowing down, and that was bad news for the former world title challenger from Poland, who couldn’t figure Grasso out by the time the final horn sounded.

Long Island’s Aljamain Sterling made a strong case for a shot at the 135-pound title, as he beat fellow top five contender Pedro Munhoz via unanimous decision.

Sterling used his range to great advantage in the first round, and his striking looked better than ever as he mixed things up and frustrated Munhoz at every turn.

A body kick by Munhoz appeared to stun Sterling in the first minute of round two, and the exchanges began to get closer as the Brazilian began to draw the New Yorker into sporadic firefights. Sterling did land some hard shots midway through the round to keep Munhoz honest, but the Brazilian’s pressure was slowing the “Funk Master” down. In the closing minute, Sterling surged again, setting up what promised to be a very interesting third stanza.

And it was interesting, as Munhoz’ kicks to the leg kept coming while Sterling worked his punches upstairs in rapid-fire fashion. As the bout closed, both slugged it out as the crowd roared, capping off an entertaining three-rounder won by Sterling via identical scores of 30-27.

An important strawweight clash took place in the UFC 238 featured prelim, and it was Tatiana Suarez keeping her unbeaten record intact as she won a three-round unanimous decision over Nina Ansaroff.

Ansaroff sprawled her way out of Suarez’ first takedown attempt, but Suarez kept pressing, ultimately putting Ansaroff on the mat. Ansaroff defended well and got to her feet, but she couldn’t break free of Suarez’ grip, and soon she was on her back again. Suarez kept her there until the horn, but Ansaroff was able to stay out of serious trouble.

Nothing changed for Ansaroff in the second round, as Suarez’ grappling again dominated the action, yet as Ansaroff was able to keep it standing in the third as Suarez tired, the Floridian had her best moments of the fight, stunning Suarez a couple times before the clock ran out.

Tuivasa got off to a good start both at range and in the clinch, but Ivanov evened things up with a right hand that dropped Tuivasa midway through the round. Given how hard he hit the deck, Tuivasa recovered remarkably quickly and got back to work in the clinch, but now he had something to think about, and Ivanov tagged him twice more with hard right hands before the end of the frame.

In the opening minute of round two, Tuivasa got his turn to rock Ivanov, and while the Bulgarian shook it off, “Bam Bam” was starting to find his range on a more regular basis. Then again, so was Ivanov, leading to some spirited exchanges between the two big men before a late choke attempt by “Baga” that was interrupted by the horn.

Ivanov worked his grappling attack effectively in the first three minutes of the final round, and once separated, it was back to throwing bombs for the pair, who each got in their share of shots before the bout ended.

Rapidly rising Russian star Petr Yan made it five wins in less than 12 months in the UFC, as he beat longtime bantamweight contender Jimmie Rivera via unanimous decision.

Rivera had a solid first round behind an effective striking attack, but in the closing seconds, Yan landed the most effective blow of the frame, dropping Rivera with a hard left hook.

The second round was almost a mirror image of the first, with Rivera in control for most of the frame until another late knockdown by Yan, this time courtesy of a hard uppercut.

Told that he needed a knockout to win, the bloodied Rivera came out fast for the final frame, and again, he landed several hard shots. But Yan was unmoved by the New Jersey product’s power, while the effectiveness of his own punches and kicks showed throughout the hard-fought 15-minute bout.

The lightweight bout between Tony Ferguson and Donald Cerrone had a main event feel, and the two top five contenders delivered on all fronts until a Cerrone eye injury prompted a second-round stoppage win for Ferguson, who extended his current winning streak to 12.

Cerrone got down to business immediately with his striking attack, and Ferguson responded in kind, but it was “Cowboy” landing the better shots in the early going. Ferguson scored with a hard elbow in the third minute, and he was starting to catch a rhythm, but Cerrone drew first blood with a shot that opened a cut over Ferguson’s right eye. Ferguson was unbothered by the cut, and the two continued to take turns landing in an exciting first round.

The pace was fast in the opening round, but Ferguson wanted to take it up another notch in the second. Yet just when it looked like “El Cucuy” might start to pull away, back came Cerrone with flurries that kept him in the fight. Ferguson’s shots were starting to take their toll, though, with a shot to the nose drawing blood bothering “Cowboy.” With two minutes left, Cerrone scored a takedown, only to see Ferguson bounce back to his feet and get back to the business of punishing his foe, with the wear of the battle showing on Cerrone’s face at the end of the round, one punctuated by a late punch by Ferguson.

Between rounds, Cerrone blew his nose and his right eye swelled shut, bringing in the Octagonside physician, who decided to stop the bout, much to the dismay of “Cowboy” and the fans in attendance. The official time of the stoppage was 5:00 of round two.

Social Post
Valentina Shevchenko def Jessica Eye via KO at :26 of Round 2

In the UFC 238 co-main event, Valentina Shevchenko successfully defended her UFC flyweight crown for the first time in emphatic fashion, knocking out No. 1 contender Jessica Eye in the second round.

Shevchenko started the second round the same way she began the first, but then she moved her kick upstairs, and a flush left to the head put Eye down and out in frightening fashion. The official time of the knockout was :26 of round two.

Social Post
Henry Cejudo def Marlon Moraes by TKO at 4:51 of Round 3

Add another chapter to the remarkable story of Henry Cejudo, the Olympic gold medalist and UFC flyweight champion who added a second world title belt to his collection Saturday night in Chicago, as he stopped Marlon Moraes in the third round to win the vacant UFC bantamweight championship.

It wasn’t an easy road to history, though, as Moraes was all offense from the start, unworried with anything that was coming back at him. Soon, Cejudo’s left leg was marked up, prompting him to look for a takedown. Moraes eluded the attempt and kept the heat on, switching up his attacks as he piled up the points.

Keeping to the “if it ain’t broke, don’t fix it” strategy, Moraes’ kicks allowed him to control the action through much of round two, but with under two minutes left, Cejudo crashed into gear with his punches and several hard knees, and though Moraes stunned “The Messenger” just before the horn, it appeared that Cejudo had turned the corner in the fight.

With Moraes winded, Cejudo pushed the pace in the third, nearly catching the Brazilian in a choke. When that came up short, Cejudo moved to a ground-and-pound attack, and after a series of unanswered strikes, referee Marc Goddard intervened, stopping the fight at 4:51 of the third round.