It seems like a lifetime ago when 20-year old Max Holloway made his UFC debut on short notice and suffered a first-round defeat to Dustin Poirier back in 2012. Now more than seven years later, Holloway has defined his career as the best featherweight in the sport while riding an unprecedented 13-fight win streak that includes a pair of wins over legendary former champion Jose Aldo. Meanwhile, Poirier has been demolishing just about everybody in his path since moving back to 155 pounds. He’s 8-1 with one no contest including three wins against Justin Gaethje, Anthony Pettis and Eddie Alvarez, all by knockout or submission.

Poirier has long dreamed of becoming UFC champion, but to win the interim lightweight title at UFC 236 he has to find a way to hand Holloway his first loss since 2013. Both fighters average around seven significant strikes landed per minute — one of the highest rates in the entire UFC — and Holloway and Poirier have combined to earn seven post-fight bonuses and seven consecutive finishes in their past seven fights. All of that adds up to a blockbuster main event where action is virtually guaranteed, and when this one is over, either Holloway or Poirier will be crowned UFC interim lightweight champion.

In the co-main event, Kelvin Gastelum and Israel Adesanya will battle it out, with the winner taking home the interim middleweight championship. Gastelum was supposed to face Robert Whittaker back in February, but the reigning middleweight king had to undergo emergency surgery for a hernia that ultimately knocked him out of the contest. Now Gastelum will look to become a UFC champion for the first time in his career while facing one of the brightest young stars in the entire sport. Adesanya burst onto the scene just over a year ago but has since racked up five straight wins in the UFC, including dominant victories against top 15 opponents in Anderson Silva, Derek Brunson and Brad Tavares. This will undoubtedly be the toughest test of his career to date, however, as Gastelum brings experience, youth and some serious knockout power into this interim title fight. Much like the main event, Gastelum and Adesanya know how to put on a show and this promises to be another jaw-dropping title fight taking place at UFC 236.

In a light heavyweight clash on the main card, Eryk Anders and Khalil Rountree Jr. will go to war in what should be a crowd-pleasing affair. Anders has always been considered one of the best athletes in the sport after a career spent playing football, including a stint at the University of Alabama. Now Anders has transformed into a top competitor at both light heavyweight and middleweight ,where he’s racked up a pair of stunning knockouts in his UFC career, including a head kick finish against Tim Williams last August. Meanwhile, Rountree has reputation for eye-popping performances while earning knockouts against the likes of Gokhan Saki and Paul Craig. Rountree has also recently upped his training by traveling to Thailand to continue building his striking skills, so don’t blink when these two ferocious light heavyweights start swinging on Saturday night.

Alan Jouban and Dwight Grant are both looking to establish themselves in a deep and dangerous welterweight division, so a win on the UFC 236 main card would be a huge statement for either fighter. Jouban has always put on entertaining fights in the UFC, including performances against Mike Perry, Belal Muhammad and a knockout against Ben Saunders in his most recent fight. As for Grant, he came to the UFC by way of Dana White’s Tuesday Night Contender Series and then earned his first official win inside the Octagon back in February with a stunning first-round knockout against Carlo Pedersoli Jr. With Jouban and Grant looking to steal the show, the fists will definitely be flying early and often in this clash at 170 pounds.

It has been just over five years since Ovince Saint Preux applied his signature submission, the Von Flue choke, to finish Nikita Krylov. Now the two light heavyweights will meet again with Saint Preux and Krylov both looking to bounce back from recent losses. Saint Preux has gone 4-2 over his past six fights while struggling to maintain his consistency at the top of the light heavyweight division. To ensure he gets back on track following a decision loss in his last outing, the former University of Tennessee football standout will have to stop Krylov for a second time as the Russian attempts to get his first win in the UFC since 2016.

Following a stunning 53-second knockout in his last outing, Jalin Turner will look to make it two in a row when he faces fellow Dana White Tuesday Night Contender Series veteran Matt Frevola in the featured prelim on ESPN. Frevola is coming off an absolute war against Lando Vannata is in his last fight. but he is still searching for his first UFC win. If he’s going to earn that on Saturday night, Frevola will have to go through Turner, who has gone 4-1 in his past five fights, with all of his wins coming by way of knockout or submission.

Related: On the Rise: UFC 236 Edition

As the flyweight division continues to sort itself out, a pair of top 10 fighters at 125 pounds will look to gain ground in the hunt for a title shot when Wilson Reis meets Alexandre Pantoja at UFC 236. Reis has been an elite fighter his entire career, with wins over the likes of Dustin Ortiz, Ulka Sasaki and Ben Nguyen. Now Reis looks to re-establish himself in the rankings while facing a young upstart in Pantoja, who has picked up wins in four of his past five fights including back-to-back victories to climb his way up the top 10 rankings. 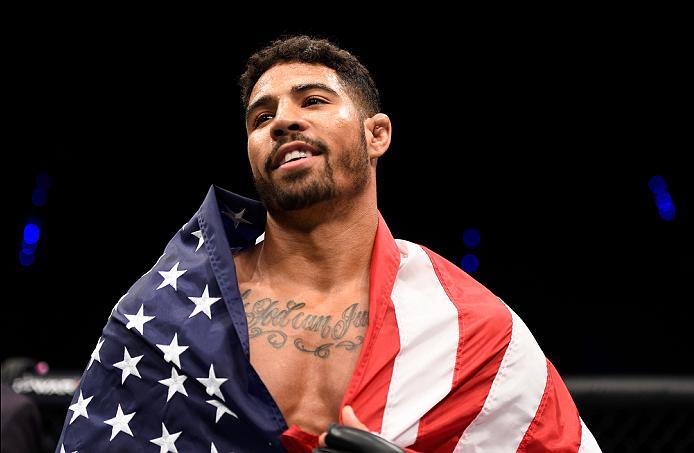 If you’re looking for a dark horse favorite to steal the show on the preliminary card, keep an eye on this welterweight showdown between Max Griffin and UFC newcomer Zelim Imadaev. Griffin is a UFC veteran with a string of exciting performances under his belt while facing fighters such as Mike Perry, Curtis Millender and Thiago Alves. Griffin is a high-output fighter who never seems to slow down over all 15 minutes. As for Imadaev, he is lightning in a bottle with a perfect 8-0 record in his career, with all eight fights ending by way of knockout. Imadaev is a risk taker and a heartbreaker with a creative striking arsenal that can produce a pulse-pumping finish at any time.

Following a win on Dana White’s Tuesday Night Contender Series to earn his UFC contract, Boston Salmon will make his long-awaited debut against Khalid Taha, who is still seeking his first win inside the Octagon. Taha made his first appearance in the UFC last year but fell to Ned Narimani in July 2018. To get back in the win column he will have to go through Salmon, who is 6-1 in his career with four knockouts on his resume already. 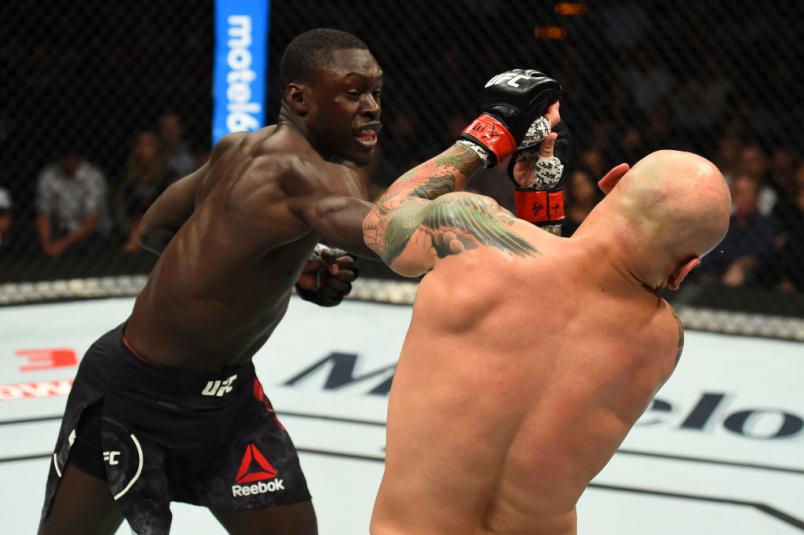 Both Belal Muhammad and Curtis Millender had their win streaks stopped with recent losses so there’s little doubt these two welterweights are going to do everything possible to get back on track at UFC 236. Muhammad has faced a long list of top-ranked fighters during his UFC career while scratching and clawing his way towards the top 15 rankings in one of the deepest divisions in the sport. As for Millender, the high-octane welterweight is 3-1 in the UFC, including a devastating knockout of former title challenger Thiago Alves in his debut. Neither fighter wants to suffer back-to-back losses so expect fireworks from Muhammad and Millender in this battle at 170 pounds.

Related: Soukhamthath Made It, Now His Goal Is To Stay

Montel Jackson has proven to be an exhilarating fighter to watch every time he competes, and after getting a submission victory in his last bout, the former Dana White’s Tuesday Night Contender Series veteran will look for two in a row when he faces Andre Soukhamthath on the early prelims. Soukhamthath has gone 2-1 in his past three fights, including wins over Luke Sanders and Jonathan Martinez. Now Soukhamthath will look to slow down Jackson’s rise as one of the prospects to watch in the bantamweight division in 2019 and beyond.

After picking up wins in her first two UFC fights, Poliana Botelho tasted defeat in her last contest, which means she’s going to be more motivated than ever before to get back on track. To secure a victory this weekend, Botelho will have to go through Lauren Mueller, who is suffering through similar ills after starting her career with five straight wins before losing by submission in her last fight. With the flyweight division always seeking new contenders, Botelho and Mueller have to know it’s time to shine or risk getting left behind when they clash at UFC 236.

In the opening bout on the card, undefeated prospect Randy Costa will look to get a win in his UFC debut against battle-tested veteran Brandon Davis, who comes into the fight off two straight losses and knowing a third would be devastating to his future inside the Octagon. Davis definitely has the experience edge in this fight but he has to be wary of Costa’s power with the 24-year old boasting four knockout finishes already while training under UFC bonus machine Joe Lauzon.

Related: Another Outstanding April on Tap