He earned a trio of wins before he turned 19 and fought current bantamweight standout Raphael Assuncao when he was 20, with the Brazilian handing the South Florida native the first loss of his career.

Nine days later, Masvidal stepped in against Joe Lauzon, knocking out the future Ultimate Fighter contestant and UFC lightweight fixture with just over a minute remaining in the second round of their three-round affair.

RELATED CONTENT: London Open Workouts Recap | Till - I Still Want To Be The Greatest

Sixteen years later, “Gamebred” is still as passionate about fighting as he was in his youth, perhaps even more so, as after a 16-month absence, the American Top Team product is finally set to make another walk to the Octagon.

“This is what I live for,” said Masvidal, who squares off with Darren Till in the main event of this weekend’s return to the O2 Arena in London.

Out of action since suffering a unanimous decision loss to Stephen Thompson at UFC 217 in New York City, the smooth welterweight veteran spent the first portion of his hiatus giving his body time to heal, something he neglected to do while keeping a torrid schedule over the course of his lengthy career.

But when he couldn’t find a willing dance partner last summer, Masvidal jumped at the opportunity to compete on the reality show “Exatlón Estados Unidos,” a cross between American Ninja Warrior and Pros vs. Joes, where he ended up lasting 13 weeks.

Once his time on the show was complete, the 34-year-old started looking around for a fight and found a willing dance partner in the recent title challenger Till.

“This social media, new age rap crap that all these fighters are doing now to get their title shots, saying that they’ll fight everybody, but getting amnesia and forgetting how to sign when that contract is in their face; that s*** ain’t cool, man,” said Masvidal, who likes to flex his Twitter fingers as much as the next guy, but also willingly steps into the Octagon whenever the right opportunity presents itself. “All these people acting like they’re the toughest dudes, but when they see you backstage, they want to take a picture with you and then they’re talking s*** — it’s a damn joke, man.

“Now when I asked him to scrap, he actually made this fight happen,” he said of Till, who is returning for the first time since facing Tyron Woodley for the welterweight title at UFC 228. “He retweeted it, talked to the UFC people and said he was interested in the bout and that’s how it came about.

“I like that he was just a stand-up dude and said, ‘Let’s fight’ and it was no big deal,” Masvidal added regarding Till’s acceptance of his offer to throw down. “This is not two countries going to war where we need the president’s approval and a treaty and all this; it’s a fight. Let’s just do it — yes or no.”

After facing similar issues in securing an opponent for Saturday’s fight card in London, Till was more than willing to take Masvidal up on his inquiry and the bout was quickly situated atop this weekend’s fight card.

While Masvidal arrives in London on a two-fight losing streak and the landscape in the welterweight division has changed since the last time he stepped into the Octagon, the fact that he’s walked right back into a main event assignment should make it clear that the lifelong fighter remains a legitimate threat in the welterweight division and a tough out for anyone with enough moxie to sign up to share the cage with him.

It’s also indicative of Masvidal’s approach — proof that he’s not just someone who talks about wanting the toughest fights imaginable before taking a “tune-up” bout or two in order to shake off the rust and get back into the win column before truly entering into the fray in the 170-pound ranks.

“I only wanted the toughest, biggest fights out there,” said Masvidal of his mindset when he started looking through the collection of talent currently assembled in the welterweight division.  “My management, my handlers, my trainers were like, ‘Maybe we’ll ease into it’ and I was like, ‘Naw — I want the hardest, best, highest-ranked opponent I can get.’

“I wanted the biggest fight I could get and this is it, so let’s do it. It’s rock ’n’ roll time. I’m going to get on that rollercoaster, put my mouthpiece in and enjoy the f****** show.”

Throughout the build to Saturday night’s main event, Till has been telling anyone who asks and anyone who will listen that he’ll be disappointed if he doesn’t get Masvidal out of there in the opening five minutes.

While Masvidal greatly appreciates Till’s moxie and the fact that he’s set such a high standard for himself heading into this weekend’s contest, the savvy veteran isn’t yet sure if “The Gorilla” is simply making noise and trying to get in his head or is really going to charge across the cage and try to put him away as quickly as possible.

Either way, after the longest layoff of his career, “Gamebred” is eager to find out. 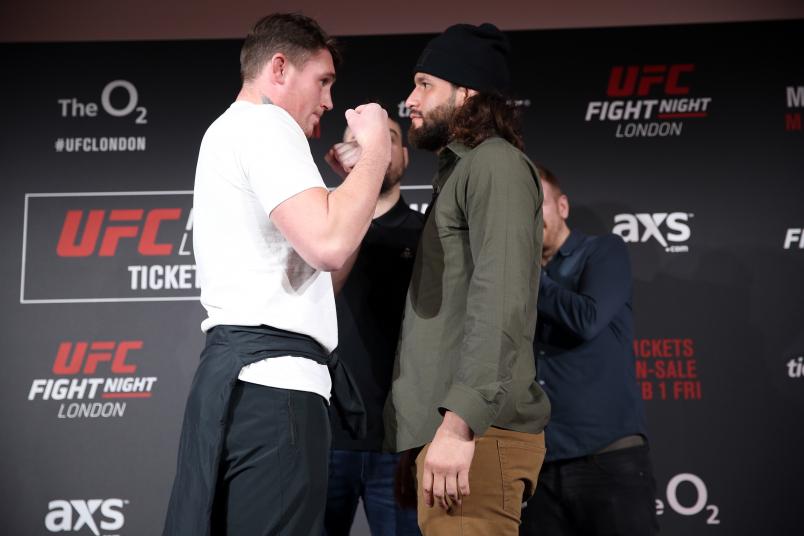 LONDON, ENGLAND - JANUARY 30: Darren Till and Jorge Masvidal face off during the UFC press confrence at BT Tower on January 30, 2019 in London, England. (Photo by Luke Walker/Zuffa LLC/Zuffa LLC)

LONDON, ENGLAND - JANUARY 30: Darren Till and Jorge Masvidal face off during the UFC press confrence at BT Tower on January 30, 2019 in London, England. (Photo by Luke Walker/Zuffa LLC/Zuffa LLC)

“He’s been telling everybody that he’s going to knock me out in 30 seconds. If that’s going to happen, he can’t be sitting on his stool. He’s going to have to come forward and connect some big shots on me and I’m eager to see what he’s really going to do — whether he’s just saying that to play mental games or is he really going to come in there and fight with me?

“Not that I’m some known brawler because if you know me, you know that I don’t brawl,” continued Masvidal, who has only been stopped three times in his career, with the last time he was finished coming nearly a decade ago. “I very strategically break opponents down. I can move my head, I’ve got great footwork, but I’m always fighting. I’m always in the pocket throwing or right outside of the pocket making guys miss, beating them up little-by-little, breaking them down mentally and physically, so I cannot wait to get in there and test this guy’s will.”

With the division more competitive and unsettled than it’s been in years and entering as the underdog in a “road game” where the raucous, partisan British crowd will be roaring for every strike Till throws, whether it lands or not, Masvidal knows that the only way he can make the plans he has for the rest of the year come to fruition is by first securing a finish on Saturday night.

“I have to end him violently; that’s the only way to do it,” he said. “With where I want to go after this fight, I have to go through Till and I can’t beat him by decision in England.

“So I just have to put the pressure on this guy, take him to the deep waters and do some things to him that he’s never seen in his life before. (If I do that), I will stop him violently. I don’t know what round and I don’t really care. If it’s one round or five rounds, I like to fight, so what round doesn’t cross my mind too much.”