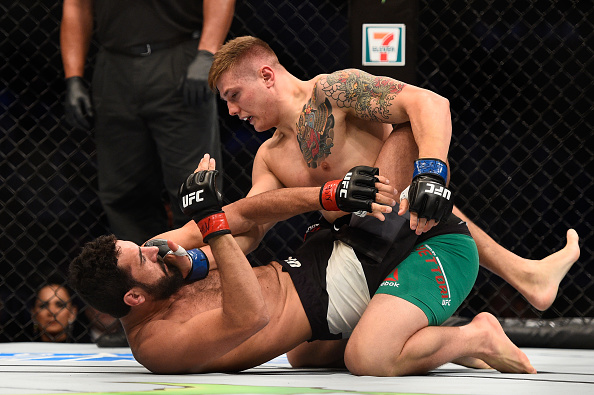 It’s the toughest question Marvin Vettori will get when it comes to acclimating to life in the United States, but he has no problem answering if he’s able to find good Italian food in California.

“I knew from before that I would have some hard times that way, but it’s all right,” he laughs. “I had to come here. It wasn’t even an option. But the food there is different, for sure.”

At least the training is top-notch for the native of Mezzocorona, Italy, who made the move to Southern California four months ago after a year and a half of traveling back and forth from Europe to the U.S. But now, Vettori is here to stay as he prepares for his Sunday bout against Vitor Miranda.

“UFC is the biggest opportunity of my life, so I can’t have any regrets and I can’t miss even one little bit of this so I have to get it all in,” he said. “From Day One, I went all in on this, but even more after my last fight, where I lost a very close decision. I said I don’t want this to happen anymore and I want to make the most out of it.”

That loss to Antonio Carlos Junior last December, evened his UFC record at 1-1, but even in defeat, he showed the potential to be a serious player in the middleweight division, and that’s almost an accomplishment in itself given that Italy hasn’t produced the amount of UFC standouts other countries have. Vettori wants to be that fighter for his home country, but to do it, he had to leave.

“It’s hard,” he said of becoming a mixed martial artist at home. “(UFC vet Alessio) Di Chirico, he was born and raised in Rome and he has some facility there and some good jiu-jitsu guys there and good boxers and kickboxers. They grew him up there and had a gym around him. For me, I come from a very small village up north and there’s nothing really. I basically invented the sport over there at a high level.”

Vettori laughs, but after a while, he knew that the training he was getting at home wasn’t going to get him to the UFC. So he first moved to London to work with the respected London Shootfighters team for two years. It was then that he believes his career truly began.

“That’s basically where I say my professional career started because that’s where I started to take it professionally,” he said.

It’s a lot for anyone to take in, let alone a young man barely out of his teens. But Vettori had a vision and a mission, and he was going to forget about living the life of his peers in order to reach his goals.

“From the start, I never had someone that told me, ‘Come to the gym, you have to do this, where are you, why haven’t you been training?’” he said. “I didn’t have a master that brought me up, so I had to be disciplined with myself. If I want to get there, then I’ve got to do this. I’ve always had to organize my training most of the time.”

5 days till i show the world what hardwork and sacrifice its all about #theitaliandream @arthur.kings @boxeurdesruesofficial @yamamotonutrition TipShow
A post shared by Marvin Vettori (@marvinvettori) on Jun 20, 2017 at 9:12pm PDT

By the end of May 2016, he owned a submission win over UFC vet Igor Araujo, and three months later he was making his Octagon debut on the UFC 202 card headlined by the rematch between Conor McGregor and Nate Diaz. He won that night, submitting Alberto Uda, and while it was an eye opening experience fighting under the lights of Las Vegas, it was also one he embraced.

“I’m seeing the top of it,” he said. “I knew it’s not always going to be like that, but I took everything in. I was having fun experiencing it, but I didn’t let it get into my mind. It can be stressful, but if you just enjoy it, it’s fun. You soak everything in and it’s okay to distract your mind a little bit before the fight.”

Vettori, 23, will likely see a lot of Las Vegas in the coming years when it comes to his fight career. And if he has his way, he will not just get a championship belt, but will also kill the stereotypes associated with MMA in Italy.

“We don’t have anything that big, and I want to be that big,” he said. “I want to prove people wrong. That’s one of my missions. People in Italy think we’re like streetfighters but it’s not like that and I want to prove them wrong. I just have to not rush, take my time, and I’ll be there.